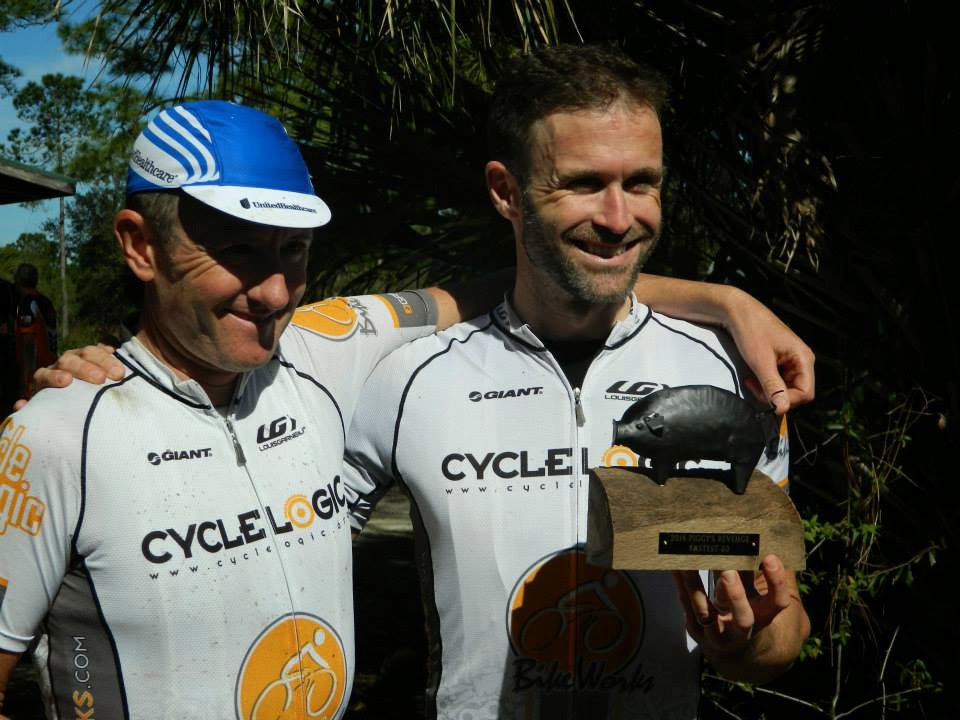 Every event has a story and this year was all about perseverance. We had 73 riders come out and many were from out of town and state. At the riders meeting, I suggested that the riders attempt some-thing beyond their comfort zone such as try and ride farther or faster than usual. Many heeded the call-ing and for example, Jake an 11 year old, managed to finish the 20 mile course with a smile and is ready to do it again while several other participants rode the Carlton or off-road for the first time ever.
The weather conspired with us and the night rain helped firm up the trails. The temperatures on Sun-day were near perfect. The routes followed the best trails the Carlton has to offer. A few riders got a little confused at some turns, it was to be expected after several hours of cycling but all made it back to the pavilion where grill master Shawn Milliken made sure the homemade brats had the required grill marks. Everyone enjoyed the food and drinks at the finish where they had a story to tell. The gator in the middle of the trail, how to master the water crossing in the single track, that mystery root or tree that tripped us up, how about that section of trail that was overgrown or vaguely marked (chuckle).
The big story was the fight for first place, with four riders from team Cyclelogic (Gainsville) who set out to defeat local rider Rick Latimer. He new his only advantage was in the single track sections of the course, so he created a gap the first time through Boldygo. Rick managed to stay away until he reached “Tom’s Oasis” at mile 28 and from then on they attacked him repeatedly sacrificing two of their riders. The winners averaging 13.5 mph for the 60 miles was Rob Robbins in first followed by Jayson O’Mahoney second both from Team Cyclelogic. Rick Latimer ended third, Kevin Greten from Sanibel was in fourth and last years winner Steve Christian in fifth. For another year the debate will continue: is a cross or a mountain bike the winning ride? Right now if you are willing to take the physical beating a cross bike is a winner.
Planning has already started for next years event which by then the single track should be longer however, Piggy’s Revenge and the Carlton will still challenge riders of all abilities. Thank you to SCORR ,everyone who participated and volunteered at the Carlton.
Eric.
Posted by Eric Claessens at 3:12 PM 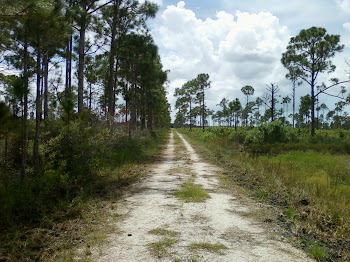 "Here piggy, piggy"
A endurance ride consisting of 10,20,40 or 60+ miles of off-road goodness in Sarasota County Florida.
The big loops will connect wilderness areas in the south end of the county.
All funds raised go directly into SCORR's trail building efforts.
Check out: www.scorrider.com
The sign up will be with www.bikereg.com.
The start will be at the Carlton reserve parking lot:
1800 Mabry Carlton Pkwy, Venice, FL 34292-1837
Parking open at 6:15 Am . No mass starts this year.
60's and 40's start between 8-830
20's 830-900

So you think you can do this?
1.Pick the distance: 10 mile wilderness ride,20,40+miles of mostly single-track ride/race .The 20 Gravel or 60 +Epic Endurance Race (dirt,gravel,singlet track,sand, and road)will be marked this year
2. Decide what class you want to ride in :
Open male
Open Female
Over the hill old fart (over 50 )
Over the hill tough girl (over 50)
3.Gather up $45 and follow this link to preregister :
https://www.BikeReg.com/piggys-revenge
REGISTRATION CLOSES at 5 pm onFebruary 26th. or anytime we reach our field limit.
NEW THIS YEAR: NO Day of Registration will be available.
FIELD LIMIT is 350 so sign up early.
All funds raised will be used for trail building efforts by SCORR
Questions?
Send me an e-mail at piggysrevenge@gmail.com .

What to expect February 28th

This is a mostly self-supported off-road ride in South West Florida .There will be one sag stop provided.You will see it twice.
The trails will be in and around the wilderness areas in south Sarasota County. The start of the big ass loops will at the parking lot of the Carlton reserve at 1800 Mabry Carlton Pkwy, Venice, FL 34292-1837. Limited support will be provided, you are on your own.
The Epic Endurance Race is 60+ miles long. It will be a mix of double track roads and trails.You will ride gravel, sand, dirt,mud,single-track,grass and pavement.
The 20 and 40 will be mostly singletrack with some double track,gravel,grass.You will have a sag stop at around 10 and 30 miles.The course will be marked with signs and painted arrows.You will be in the middle of a large wilderness area ,we will not come and rescue you.You are on your own,be self reliant.
The 10 mile wilderness ride will be a guided introductory no drop ride on gravel and dirt roads.There will be a Sag stop around 5 miles.Expect to see a lot of wild things especially wild boars ,deer and alligators plus all kinds of flying and crawling critters.

Rules of the game.

The #1 rule of the event is: You are responsible for your own welfare.

You are on your own.

You are on your own

The organizers and anyone having anything to do with this race are not responsible for your safety.

Piggy’s revenge is a non-stop self supported solo event.

You must bring with you all the necessary supplies and equipment.

Each rider is considered to be on a private excursion and remains solely responsible for any accidents in which he or she may be involved. No responsibility can be accepted for riders becoming lost or stranded.

If you accept help from anyone beyond that offered by a fellow rider, you will be disqualified.

Prearranged outside support is not allowed.

You must wear a helmet and obey any traffic laws. Use your head and remember you represent the entire cycling community .Don’t be an Ass and respect the land you travel over as well as the people you might meet along the way.

You will be riding on multi use trails, Yield to the other users.

You must stay on the course .If you leave the course for any reason you, must re-enter at your point of exit or you will be disqualified.

No short cuts or alternate routes are permitted. If you get lost backtrack

We are not going to come and bail you out .You are on your own.

Bike choice is up to you! We are allowing mountain bikes, 29rs, cross or road bikes(not recommended ).

The terrain has some sandy areas so keep this in mind. But cross bikes would definitely work. All single speeds must finish and start in the same gear, you can run a flip flop hub but both gears must have the same number of cogs.

Riders will get a course map ,Cue sheet or GPS file.To be determined.

The event will happen regardless of the weather or the tides.

A cell phone might come in handy.Make sure it can hold a charge for the entire ride (no chargers in the woods)

Riders can help other riders with mechanical support.

You will encounter a lot of wild animals; make sure you know how to handle yourself in the presence of wild boars, alligators,deer and snakes .Look before you stand, fire ants can ruin your day. Depending on the amount of rain some of the trails might be under water that means more bugs.

There is limited sag support.

Be ready to experience a side of most never encounter.

There will be a time limit for the event, the park closes at 6 pm.You car has to be out of the parking lot by then or you will be locked in.

Remember to have fun